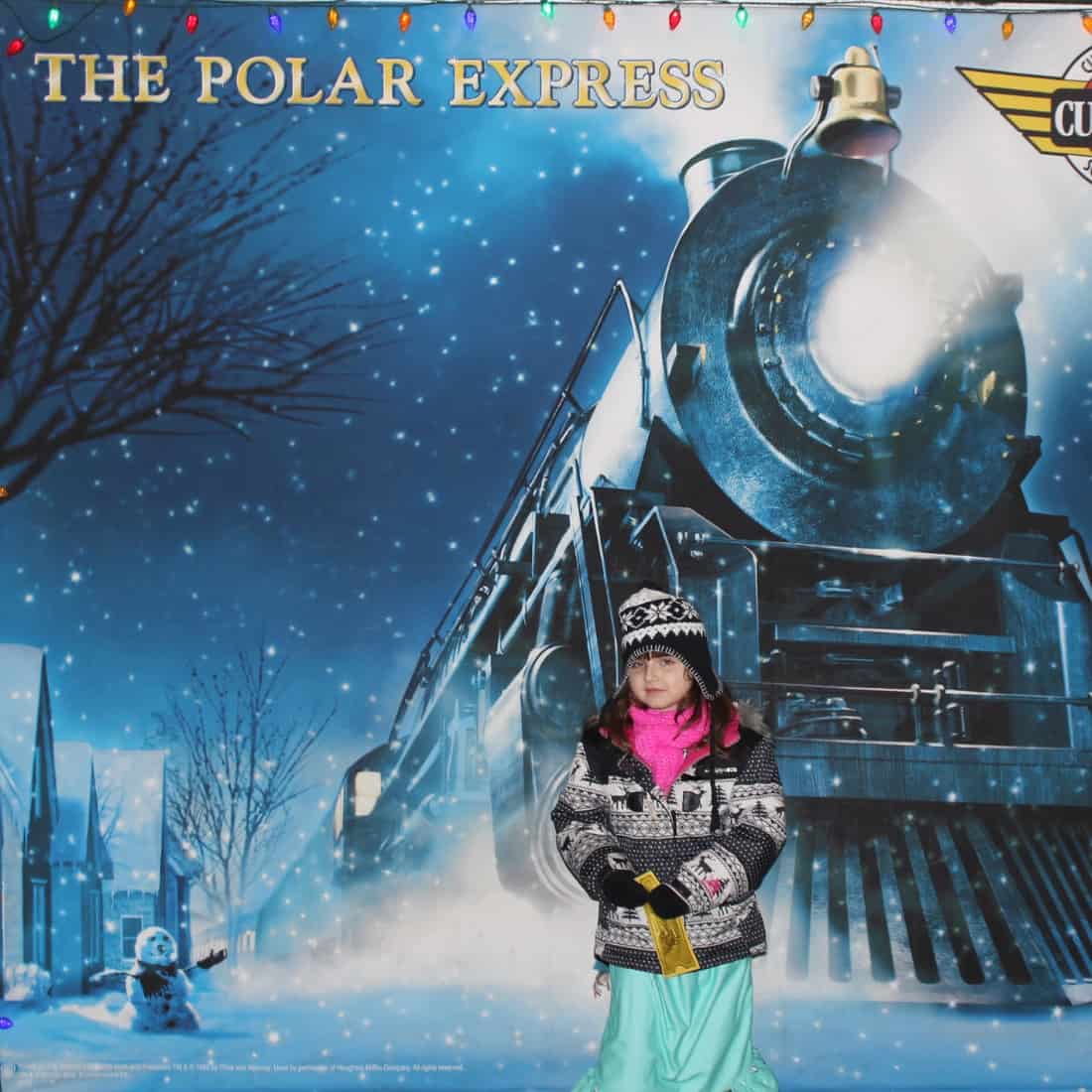 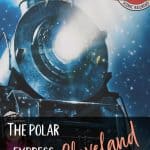 That’s the premise of The Polar Express for those that have not heard of it. I saw it in my daughter’s eyes the entire evening we were aboard the train.

Little TFT was so excited. She honestly believed we took the train to the North Pole and back.

For those of you that are unaware of what this is, The Polar Express is both a book and a movie. A young boy that does not believe in Santa is transported to the North Pole via a train called The Polar Express.

On the train, he meets many kids, all dressed in their pajamas. They are excited to visit Santa and his elves. But, the real treat is the golden round trip magical ticket that winds its way throughout the storyline.

Once at the North Pole, this young boy receives Santa’s first gift of Christmas, a bell from Santa’s sleigh. However, the boy has a hole in his pocket and loses it. When he wakes up Christmas morning, he finds the bell as a present from Santa. Only those that truly believe can hear the bell’s ringing and he now hears it himself.

The Polar Express in Cleveland

The Cuyahoga Valley Scenic Railroad (among other railroads across the USA) lets kids experience the magic of The Polar Express themselves during the holiday season.

Children receive a magical golden ticket upon arriving at the train station. We departed from the Rockside Rd station in Independence, but there is a North Akron station as well. Unfortunately, it rained on our trip. However, the train is heated, so inclement weather is not an issue.

After receiving three emails in the days prior to our ‘trip’ that said to be there at 6:00 pm because the train was leaving promptly at 7:00 pm and would wait for no one, our train didn’t depart until 7:15 pm. This frustrated me as we arrived on time as requested and reminded. After these emails, I expected the train to leave at 7:00 pm sharp.

Select your seats when purchasing tickets. There are three classes of service: standard, deluxe and executive. We purchased the standard class which includes hot chocolate, a cookie, a program and a sleigh bell. The deluxe class added a take-home mug and tables by your seat. The executive class also added the take-home mug with plush lounge chairs.

Santa’s elves greeted us as we boarded the train and showed us to our seats. They also gave us name tags, presumably so Santa knew who we were. Holiday garland decorated the train cars with pictures wrapped as presents.

After finding our assigned seats, Little TFT and I went to the gift car where we bought popcorn ($4 each) and a bottle of water ($2). The gift car is only open before and after the train ride, not during it. They have a selection of gifts such as ornaments, mugs, small trains, snow globes, stockings and candy.

Fifteen minutes late, the train left the station. Now the party is going to start. Or so I thought. Unfortunately, it was quite subdued. The family across from us said this was their fourth year on The Polar Express. They said all prior years there was singing and a full party atmosphere. Not this time. It was quiet.

Eventually, one of the elves read the story of The Polar Express. She had a microphone that emitted loud feedback for most of her reading, so it was not as enjoyable as it should have been.

After the story, the elves served hot chocolate and a cookie. There was no singing or dancing to the hot chocolate song as in the movie or in previous years according to our neighbor family.

As we approached the North Pole, the kids became excited. Remember, my 6 and a half-year-old daughter really believes we were going to the North Pole.

The elves gathered the kids on the left side of the train because the North Pole (which is actually the town of Peninsula) was only on that side. Holiday signs welcomed us. Plus, there were lighted displays and many of Santa’s elves lining the tracks waving hello.

Kids were beyond excited to be at the North Pole, but the real highlight was Santa making his entrance on a sleigh. The children erupted in screaming and excitement as they saw him glide in right in front of us.

Santa boarded the train and made his way through the cars starting at the back handing out a sleigh bell with a leather tie to each child. Elves distributed sleigh bells with a red ribbon to parents. We were in car 3 and Santa visited us about 5 minutes before the end of our trip. I don’t know if he was able to visit cars 1 and 2 or if they were empty.

The sleigh bell is what my daughter wanted. I don’t know why. She loves ringing the bell and telling me she can hear it. Just like in the movie.

While I was slightly disappointed in this production, my daughter was on cloud nine. She enjoyed everything. After we disembarked, she gave me a big kiss and said thank you for our ride to the North Pole. She also called me cool!

Tickets for this ride are not cheap. I looked at it as once in a lifetime, but because Little TFT enjoyed it so much, we could return. Standard class train car seating is $45 per person, the deluxe car is $65 per person and the executive car is $85 per person.

In 2017, The Polar Express runs from November 11th through December 16th. However, tickets sell out quickly. If you are interested, find out when they go on sale and purchase in the first 2 weeks.

It was magical to see all the little kids so excited. This story has become such a classic to them, similar to how The Christmas Story was to our generation. For them, the bells continue to ring. They continue to believe. Do you?

We use cookies to ensure that we give you the best experience on our website. If you continue to use this site we will assume that you are happy with it.AcceptNoPrivacy policy