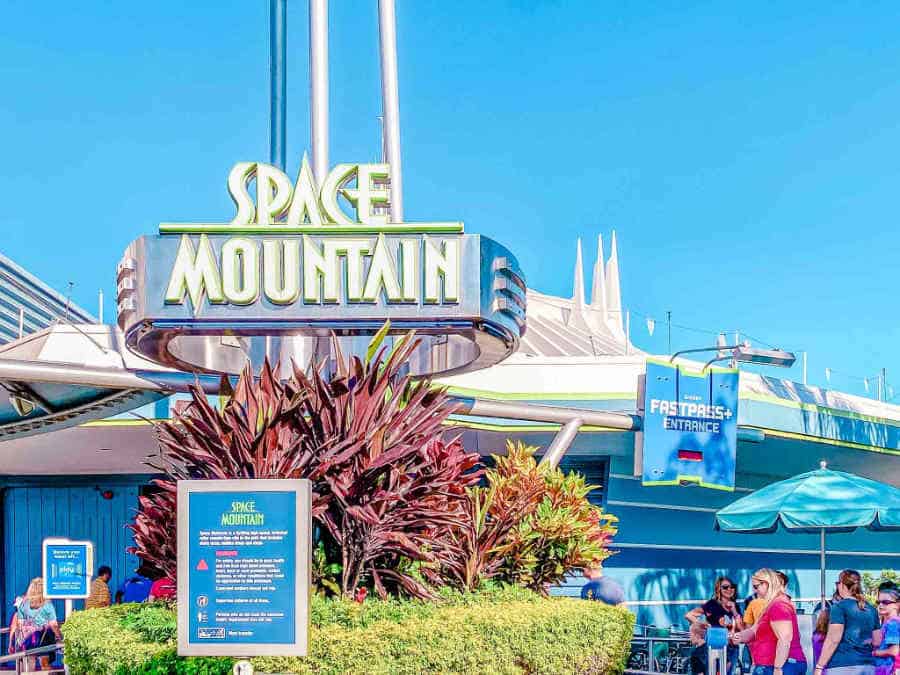 Space Mountain is one of the most popular amusement park rides in the world. Located in most Disney parks around the world (all except Shanghai Disneyland), it is a must-do for many visitors.

But some people wonder ‘Is Space Mountain scary?’. Let’s take a look at what to expect on this ride and whether or not it might be too scary for some.

Space Mountain first opened at Disney World Resort in 1975. It was an instant hit with guests and has been one of the most popular rides ever since. Located in the Magic Kingdom Theme Park, find it in Tomorrowland by taking a right at Cinderella’s castle.

This attraction takes guests on a journey through space. Riders board a “rocket” which speeds through the dark night sky, making quick turns and several drops along the way.

It is one of the most popular attractions in the park and often has long lines, especially in the afternoon.

Most people would not find this ride intimidating as it is a relatively slow coaster with speeds of 28mph.

However, the ride experience is different than other coasters. It is an indoor roller coaster with sharp turns and the entire ride is in the dark.

In part due to the Disney magic, this attraction feels faster than other Disney coasters. To me, this ride is jerky and lacks the smoothness of both the Seven Dwarfs Mine Train and Big Thunder Mountain Railroad.

If I’m being completely honest, a couple years ago I ducked out of line because I was too afraid to go on it. Of course, I’ve never lived this down, so now I will ride it once per trip, but no more. Since there’s a Joffry’s coffee nearby, I’d rather hang out there!

Yes, Space Mountain has height and age requirements in order to ride. Riders must be at least 44 inches tall (112 cm) to board the rocket.

Space Mountain Speed: While it may seem like Space Mountain travels quickly through space, its top speed is only 28 mph (45km/h). The ride often feels faster due to the darkness and turns in the track, however.

Space Mountain is a roller coaster-type ride with quick turns, sudden drops, and a few jerks along the way. While it may seem intimidating at first, its relatively slow speed makes it a great choice for first-time roller coaster riders.

The ride is also much less intense than some of the other roller coasters in Disney World, so those who are worried about being scared can still enjoy this attraction.

Space Mountain at Disney World uses a 3-seat single rocket car to take guests through its track. Two rockets are attached together, allowing 6 people to traverse space together. Since each person is in their own seat, keep this in mind for youngsters that are riding with you.

Pull the t-shaped lap bar toward you and remember to put any bags on top of this bar, not under it.

Admittedly, I have a hard time getting out of this seat as your legs are wedged behind the seat in front of you 😩.

Disney World’s Space Mountain consists of two different tracks, Alpha and Omega. They intertwine with each other throughout the ride, but since it’s so dark, you only hear the other vehicles buzz by you.

Yes, this attraction has it all!

For those wondering if Genie+ is worth it, you have the option of securing a lightning lane reservation made through Genie+.

Personally, we rope drop this ride first thing in the morning and use our 7 am Genie+ at Big Thunder Mountin. Adventureland doesn’t have early entry, therefore more people are in the park by the time it opens.

Single rider is great for those that don’t mind splitting up. Actually, it’s how my daughter rides Space Mountain when I don’t want to go on it again!

Families interested in Rider Switch can use that as well. Just talk to any of the cast members at the entrance who will help you.

This past year was the first time I experienced this holiday-themed ride overlay.

Red and green lights flashed during the Christmas song-filled ride. Actually, this made it easier to see the track and I was less nervous (although it was still jerky).

Based on the early success of Magic Kingdom’s Space Mountain, Disneyland Resort in California opened this ride two years later.

However, due to space limitations, there are several differences:

What do you think? Which one would you prefer?

Most families with small children prefer Disneyland’s attraction since it has a lower height requirement and your child can sit right next to you.

If you were to ask my 10-year-old daughter, Paris Disney’s HyperSpace Mountain ranks as one of the best rides at any Disney Park.

It has three inversions within the dark ride and therefore requires you to wear a shoulder harness.

Seating across is for two people in a similar type of rocket ship.

Theming is different as well. In 2017, this ride was reimagined for Paris Disney’s 25th anniversary and a Star Wars theme was born.

This is the only Space Mountain that has a launch to propel you into space (while playing the Star Wars theme song of course) and a part of its track is outdoors.

Riders must be 47 inches tall to ride as this is the fastest Space Mountain at 44 mph.

This park combines the track of Disneyland CA’s ride with the theming of Hyperspace Mountain in Paris.

The newest version of Tokyo Disney’s Space Mountain is similar to that of Walt Disney Worlds with a futuristic feel to it.

Rockets travel at 30mph and have a height requirement of 40 inches, making this one of the more family-oriented space mountain rides.

Early in 2022, it was announced this ride would be completely rebuilt with state-of-the-art theming, special effects and performance. It is set to close in 2024, with a reopening date set for 2027.

Is Space Mountain an intense ride?

Space Mountain is one of the scariest rides at Disney World due to its total darkness and fear of the unknown. However, after riding it a few times, you realize there are really no big drops, but rather sharp turns and a lot of jerkiness.

Is Space Mountain okay for a 7-year-old?

If your 7-year-old meets the height restrictions, then it is more of a matter of if he/she will be comfortable in a very dark and jerky ride. Remember, your child will not be in the same seat as you. That said, my daughter isn’t scared of any rollercoasters and she loves going on them, so trust your instinct.

Which is scarier: Space Mountain or Big Thunder Mountain?

In my experience, Space Mountain is scarier. I think the added excitement of the ride’s darkness contributes to these being scary rides. Even though Big Thunder Mountain has a faster speed, it is a lot smoother and the theming is fun.

Does space mountain flip you?

Space Mountain at Disney World clocks in at 28mph whereas Space Mountain in Disneyland CA travels a little faster at 35 mph. These thrill rides are some of the fastest rides in both parks.

How long is Space Mountain ride?

Who should not ride space mountain?

Due to its high speeds and sudden turns, you should be in good health to ride Space mountain. those prone to motion sickness, expectant mothers, or have high blood pressure should refrain from riding. This is Disney’s standard policy.

Overall, Space Mountain is one of the most exciting Disney World rides appropriate for a wide range of ages and heights. While it may seem intimidating, it’s not overly scary and can be enjoyed by all.

So, whether you’re an adrenaline junkie or a park first-timer, this is one ride that you won’t want to miss!

So the answer to our initial question is: No, Space Mountain is not scary.

However, it does contain some thrilling elements and its dark atmosphere may be a bit startling for some passengers. But overall it’s a great ride and one you’re sure to enjoy!

So, what are you waiting for? Hop on board and soar through the stars today! 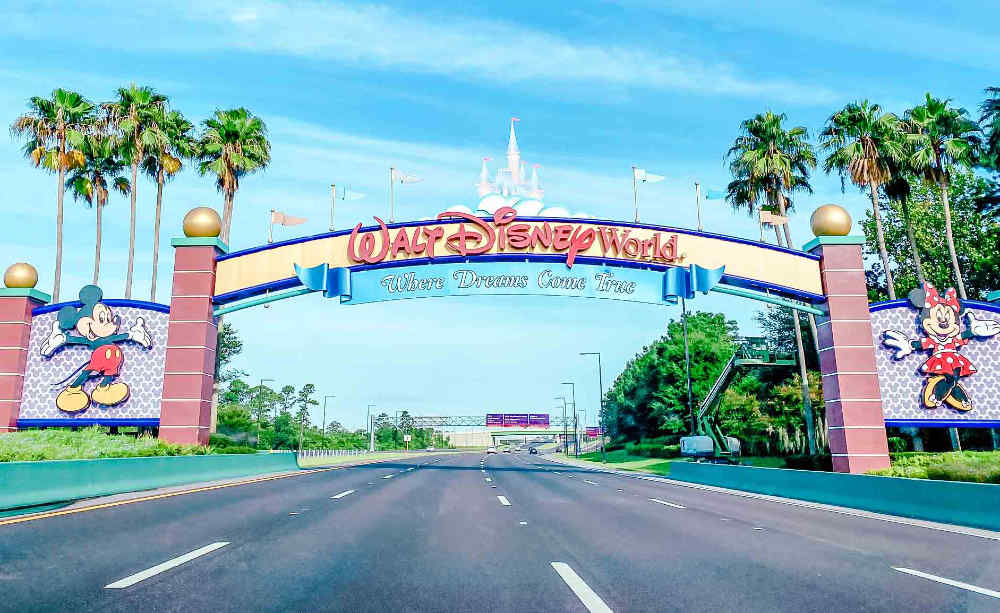 Disney World is a magical place where dreams come true. It’s a place where you can enjoy rides, shows, and attractions that you won’t find anywhere else. Whether this is your first time going to Disney World or your hundredth time, there are some things that you should always remember to pack! In this blog… 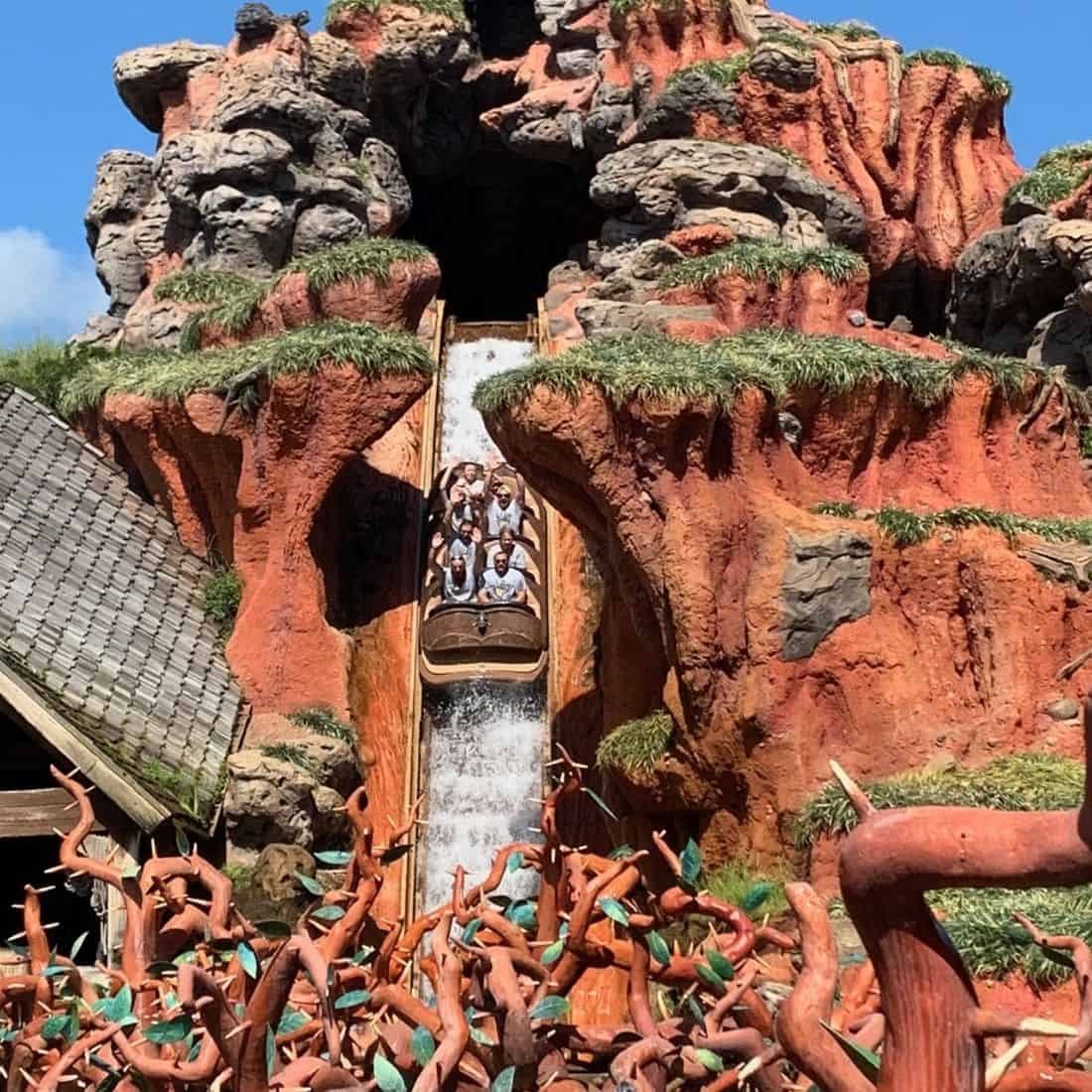 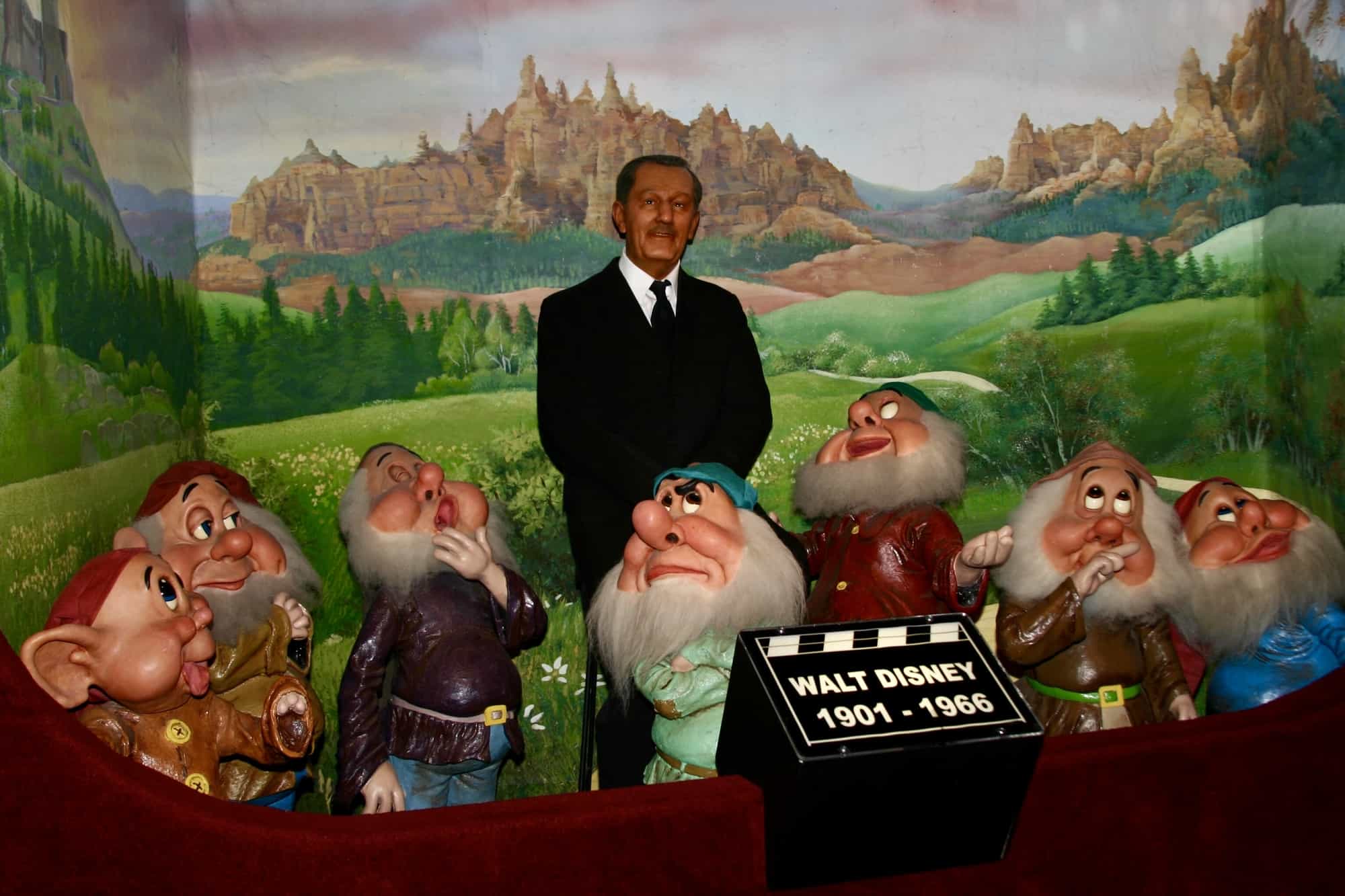 Do you remember the 7 Dwarfs names? Snow White and the Seven Dwarfs is a well-known story that will forever be loved. Let’s take a closer look at each of the seven dwarfs names in order to identify them by their personalities. These seven men have made an impact on many generations of children who… 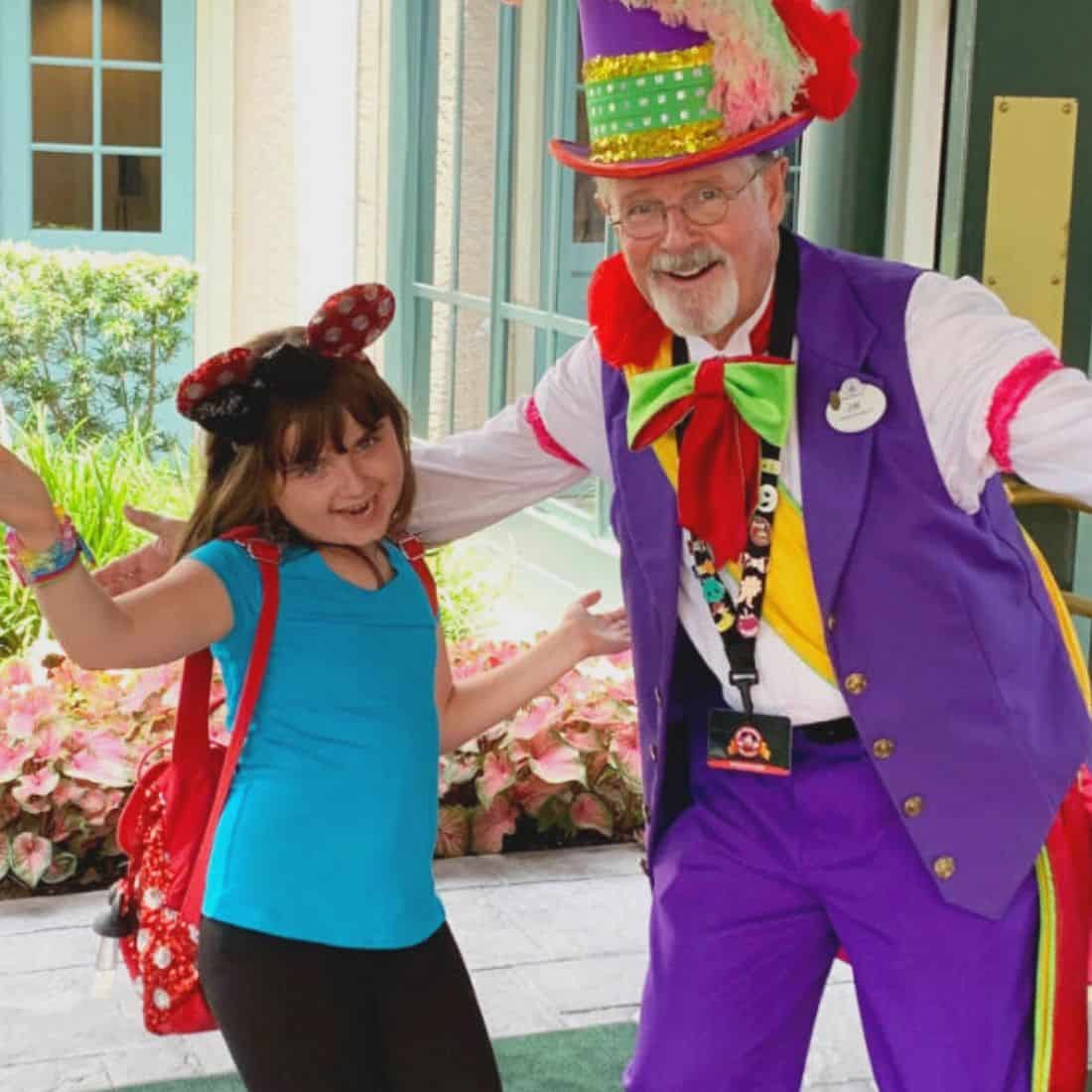 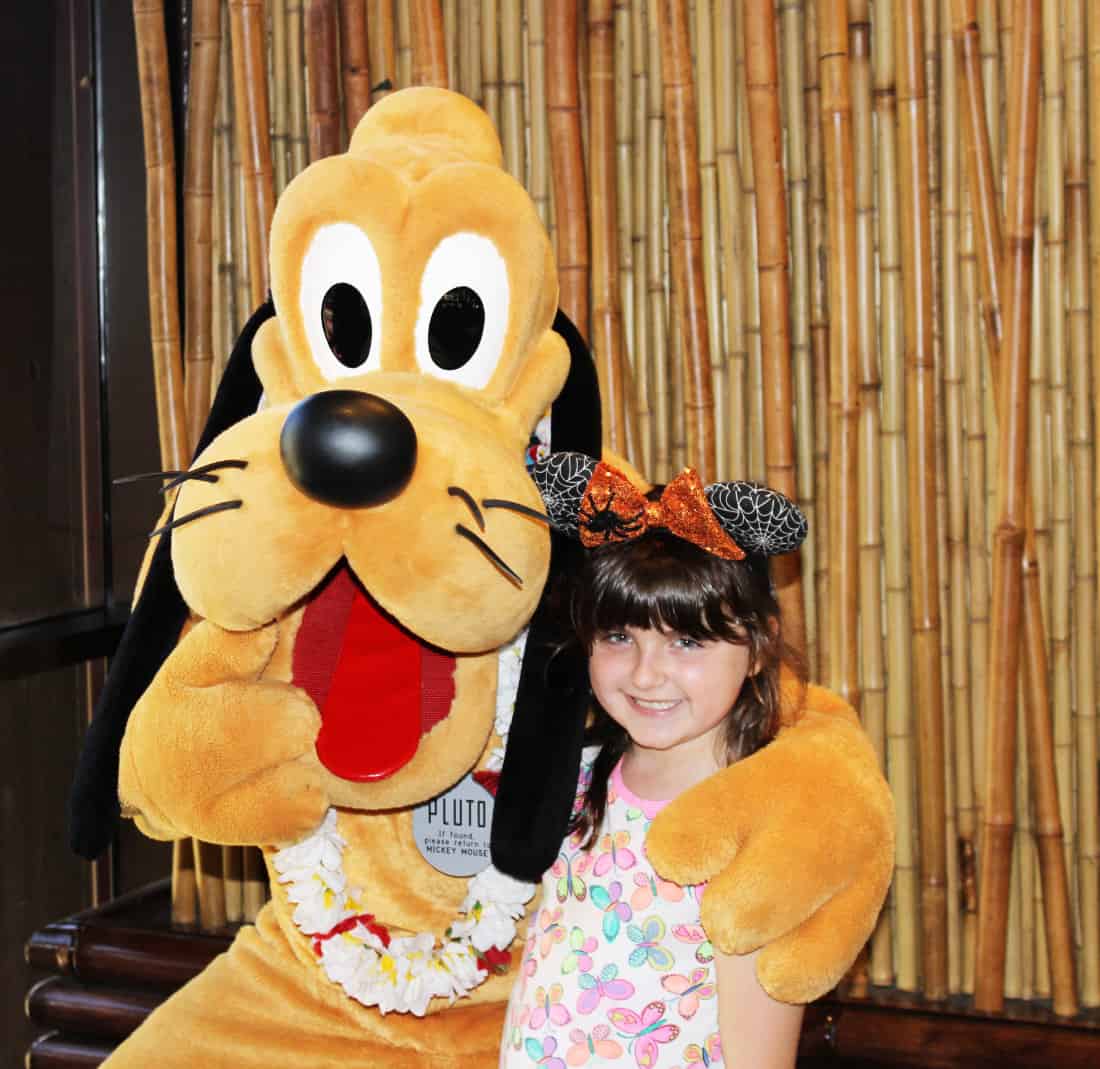 Booked your Disney trip, but wondering where to start when making Disney World dining reservations? This guide walks you through it, step by step. Whether you are looking to make character dining reservations or for a fancy restaurant for 2, follow along with the screenshots and you will have your reservation confirmed in no time…. 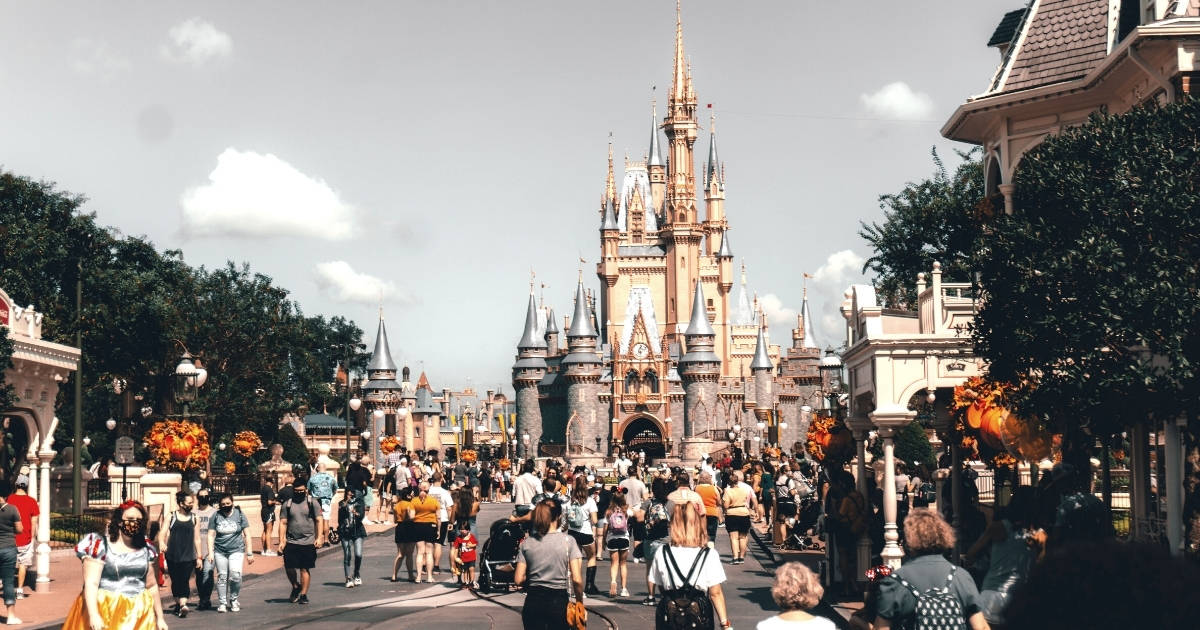 A Disney vacation is one of the dream destinations to visit for every family! With so much walking to do, you want to find the best stroller for Disney World to ensure everyone has a comfortable holiday.  Every family is different, therefore before selecting the perfect stroller,  there are many considerations to make, such as…